Give yourself a scrumptious start to the day with a delicious and satisfying Quorn Sausage breakfast quesadilla. Wrapped in a soft tortilla, this Mexican favourite is packed with savoury cheese, chopped up Quorn Pepper and Herb Sausages fried until they’re golden brown, and eggs, all flavoured with subtle notes of smoked paprika. An unbeatable breakfast for champions. 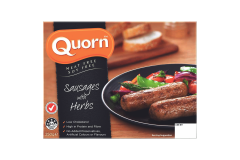 Made with Quorn Pepper and Herb Sausages

There's nothing more comforting than coming home to a big helping of home-cooked vegetarian cottage pie. Our take on...

Our deliciously healthy Thai Noodle Soup recipe made with Quorn Pieces is a dish you will want to make again and again.

Enjoy a healthy twist on a family favourite with this sausage and bean stew recipe. The smoked paprika and sweet...

For a tempting taste of Italy, try our delicious Quorn Mince lasagne recipe. Fresh celery, onion and garlic, fried up...