Our super tasty Hot and Spicy Vegan Burgers are packed with fresh flavours and textures to create this Mexican inspired recipe. Smashed avocado, vegan yoghurt, jalapeños and fresh cilantro are layered in a sesame seed bun and served simply with a griddled corn salsa.

For the grilled corn salsa: 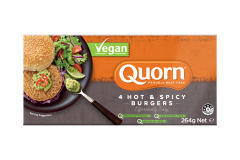 Made with Quorn Vegan Hot and Spicy Burgers

Try our Quorn Vegan Fish Free Fingers with Chips for a classic 'Fish and Chips', you won't notice the difference....

Throw together this Quorn Vegan Nugget bowl in next to no time at all. Simply add our Vegan Nuggets to fresh greens,...

Enjoy a smoky twist on traditional tacos with this chipotle infused recipe. The chipotle paste, garlic and onion mix...