Sweet and spicy with a kick, these tangy Jerk Quorn Fillets flavoured with chilli, cinnamon and ground ginger will wake up your taste buds with a splash of Caribbean sunshine. Served on a bed of rice and peas with a wedge of lime. An absolutely divine meal idea. 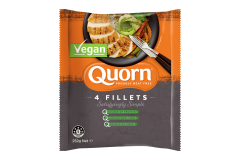 Made with Quorn Vegan Fillets

Try our Quorn Vegan Fish Free Fingers with Chips for a classic 'Fish and Chips', you won't notice the difference....

A delicious noodle dish flavoured with chilli and ginger, and made with Quorn Pieces.