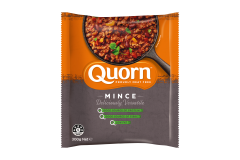 Our super tasty Hot and Spicy Vegan Burgers are packed with fresh flavours and textures to create this Mexican...

There's nothing more comforting than coming home to a big helping of home-cooked vegetarian cottage pie. Our take on...

Very tasty! I do prefer the ginger to be grated and cooked with the mince at the start of the recipe. I have tried cooking as per this recipe and prefer the flavours when stir-frying earlier. This is also easy to alter the amounts of quorn mince vs vegetables to your liking. For example, I just added a bit more capsicum and a little less snow peas. I didn't garnish with a radish but I might add a bit of pak choy next time for some green. Really yummy! Will cook again!